Balkrishna Doshi discusses how his designs seek to combine native aesthetic with the demands made by climate. 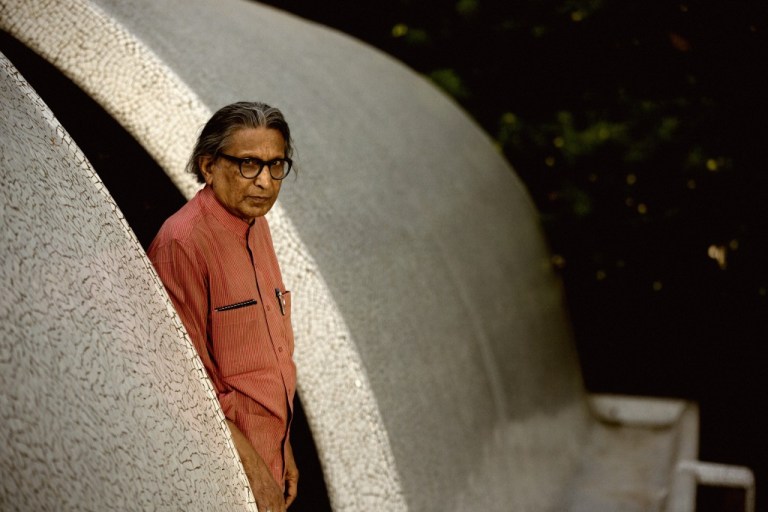 It is nine o’clock in the morning on February 27, 2013. The rattle of thousands of engines submerges Ahmedabad in a quiet roar. We are not far from the Pakistani border in this city of six million inhabitants. My travel companions and I are at Studio Sangath, Balkrishna Doshi’s office building, which he has designed. He received us, interested in visitors from far-away northern Europe.

The trip to Ahmedabad actually began in the summer of 1991 at an International Laboratory of Architecture and Urban Design seminar in Urbino, Italy. Doshi was a lecturer, I was a student. Twenty-two years later the idea about a meeting was born and after a quick email exchange, a welcoming door opened up.

When Louis Kahn was chosen to design the Indian Institute of Management in Ahmedabad, Doshi supported Kahn. He also acted as the local architect on site.

Doshi has designed one of India’s leading architect schools at CEPT University, a design not far from Bengt Edman’s or Giancarlo De Carlo’s university architecture. Red bricks, concrete beams and a structure as taken from the arrangement of rooms in a medieval town, but expressed in a modernistic idiom. Walls shape places both indoors and outdoors, light and shadow are best companions. 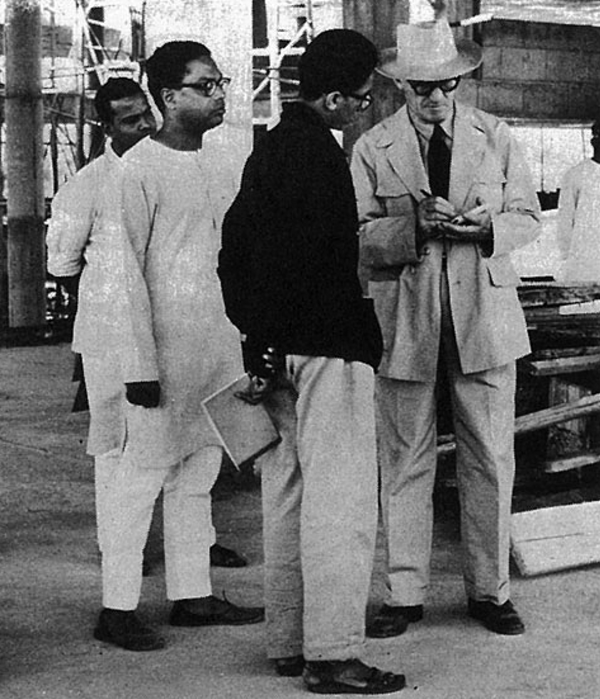 A young Doshi in a black jacket on a construction site with Le Corbusier.

The years with Le Corbusier

“When I joined Le Corbusier’s office in Paris in 1951, I was thinking about my town – Pune, south of Bombay where I grew up. And I was contemplating our traditions. You sit on the floor, you eat with your hands and you live in close proximity to other people. The rooms are not separated but used for all functions. You are part of the street, which is part of the community. You don’t notice the noise from the city, you never think about those things.

And I compared it with Paris and its tall buildings with balconies, but nobody is on them. The streets of Paris are beautiful; the sidewalks are full of life, of course. But otherwise, people live on different floors separated from each other. It was a big change for me to arrive there.

And the grand scale in Paris is very different from here. Everything here has a finer, smaller scale, yes, except for Mogul architecture. There is a lot of porosity and fragility in our buildings as they are made from wood and thin stones. The walls are very light. So those questions became very important to me.

When I worked with Corbusier I was amazed by the way he looked at things. He studied people and lifestyles and he created brilliant buildings that were open and almost empty. He really hit the spot, you know. And he told me that porosity and multiple uses are very important and that you should be able to feel the breeze blow through the building. He used to paint birds inside these buildings as a symbol for the breeze and the continuity of life.

I spend almost twelve years working with him and we had long talks. He was my best friend. We worked in Chandigarh and here in Ahmedabad with the Mill Owners’ Association and with some private homes. Corbusier found the plasticity of concrete here in India and he found the béton brut here. Look at Villa Sarabhai here in Ahmedabad. You find the façade very simple, almost non-architectural. Notice how you are met by a façade pattern, then you walk inside it with the concrete vaults and it unfolds. It was drawn for a widow and her two sons.” 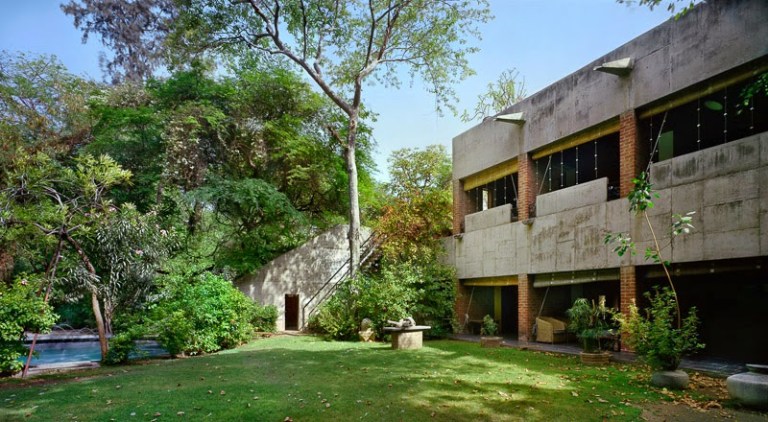 “Louis Kahn came to India in 1962. I was part of inviting him to create the campus of the Indian Institute of Management here in Ahmedabad. And we worked together until his death in 1974. He died on his way back from here. I used to meet him often so we had a personal relationship. We had many discussions.

Kahn thought of Corbusier as a guru so I was in a sense a link between the two. Khan was also very interested in ventilation and light but in a different way from Corbusier. He was looking for order and Corbusier was looking for exception. For me, that is close to Indian philosophy, order and exception. 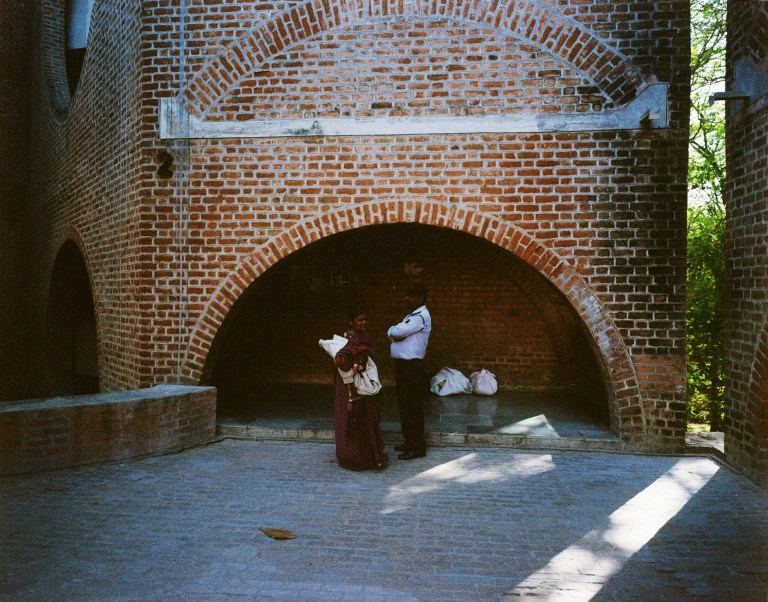 A washing woman talks to a security guard at Louis Kahn’s Indian Institute of Management in Ahmedabad. Credit: Lars Gezelius

Technology and how architecture changed with it

“One of the first buildings I designed was the school of architecture here in Ahmedabad. It was in the early 1960’s and I used a way of thinking that I had learned from Corbusier. There was hardly any money so we used only a few materials. You can open up the big doors in the building and use the space for any purpose you want. There are classrooms on the lawn, on the roof and in the gardens. There is a lot of shade and breeze. These are important things for us because of the climate.

Almost all education is now computerised. But you can never exchange the feeling you get from creating architecture with pencil on paper. Your hand is moving, your fingers and your eyes are moving. And your thoughts register what your body is doing. And as an architect, you must feel the dimensions, the spaces and you must use your human sensibility. The brain and the hand are directly connected.” 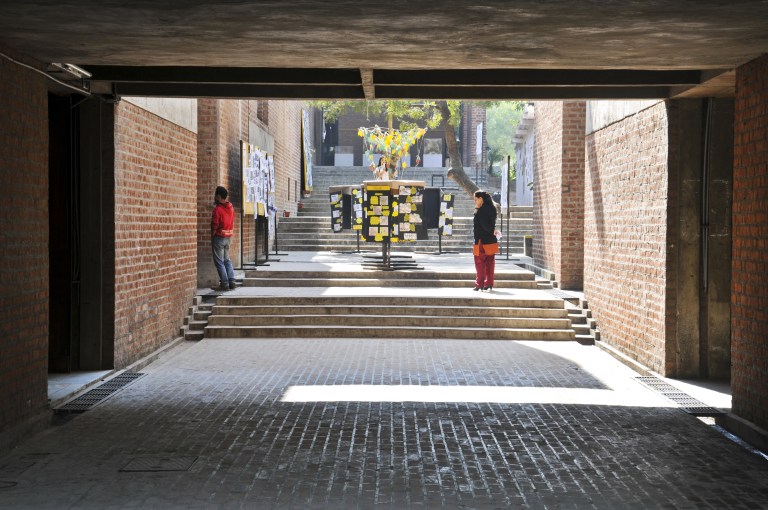 “In these buildings, I left the international style and tried to use an idiom based on Indian tradition. I tried to be my own. The configuration is different but also very traditional. Intuition and search are the principal words instead of rationality and answers. The entrance is very small and hidden. The rooms are very airy. I was looking for memories from my childhood. To be lost. To move with the help of all senses.

I bought this property in the 1960s and collected used material from my constructions sites. The roof here is covered by factory tiles. I didn’t pay for the materials but only for transportation. The buildings are lowered into the ground. That creates a small outdoor scale, even though the rooms are very tall. The outside is as important as the inside here as well. We use the garden for many activities. My daughter had her wedding here.

The way architects think is changing. We see a lot of buildings with air conditioning, even cars have it. And with the light, you have to have constant illumination. You don’t adjust with the variation of the day, but we create buildings with constant light and climate. And we are making buildings for a specific use, not as part of nature. The change of nature is forgotten. Nature is the only thing that is not constant, it is always changing.” 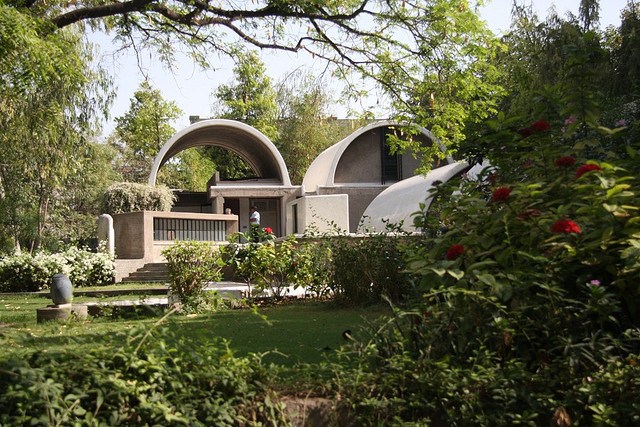 Lars Gezelius participated in and wrote down the conversation. He is an architect working for ETTELVA Arkitekter and Schlyter/Gezelius Arkitektkontor. Other participants were social anthropologist Per Ståhlberg and architect Camilla Schlyter. Translation by journalist Karin Gezelius Bergstresser.