One of the most influential architects of post-Independent India, Doshi has been best known for his innovative work of designing low-cost housing, in a career spanning over seven decades. 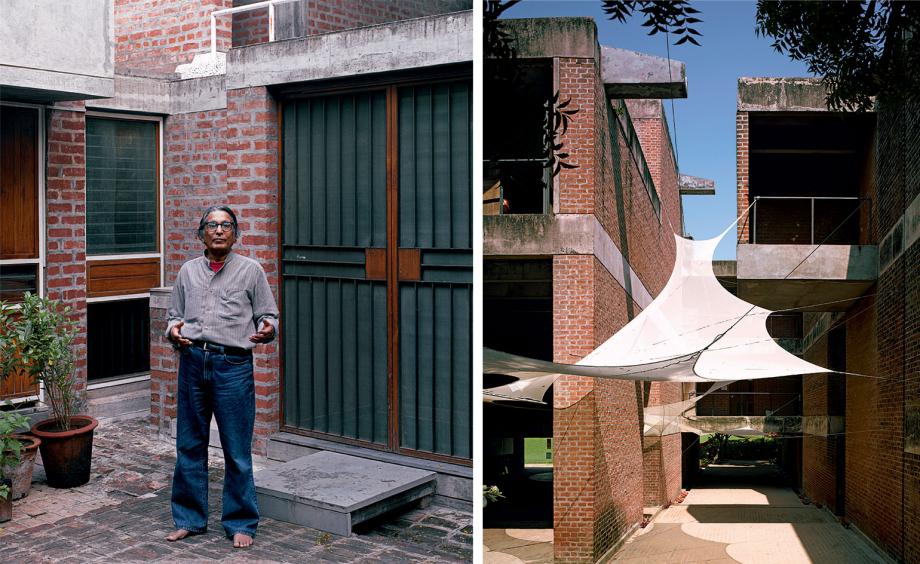 Left, Doshi outside his self-designed home, dating from 1961. He believes ‘cities should concentrate’, and he lives, works and teachers within a 4km area. Right, the School of Architecture designed by Balkrishna Doshi, at the Centre for Environmental Planning and Technology. Photography: Edmund Sumner

He was a fan and follower of Le Corbusier, but Balkrishna Doshi [who just won the prestigious Pritzker Prize 2018] has developed a uniquely Indian modernism.

The first thing that you notice about Sangath, Dr Balkrishna Doshi’s office in Ahmedabad, India, is it feels more like a communitycentre or a college campus than it does an architectural practice.

An improbable oasis of calm on the furiously busy Thaltej Road, Sangath is a leafy and meditative compound, the landscaped grounds dotted with water features, benches, pieces of sculpture and clusters of people – employees? students? visitors? – sitting talking under the trees.

Clearly designed with Ahmedabad’s ferocious climate in mind, the complex is clad in glittering white tile fragments to reflect the sun. And with half its height buried below ground level, all that is visible is a series of low vaulted chambers. Windows and doors are small and deeply recessed, and oversized water spouts channel rainwater into cascading tanks and an underground reservoir. 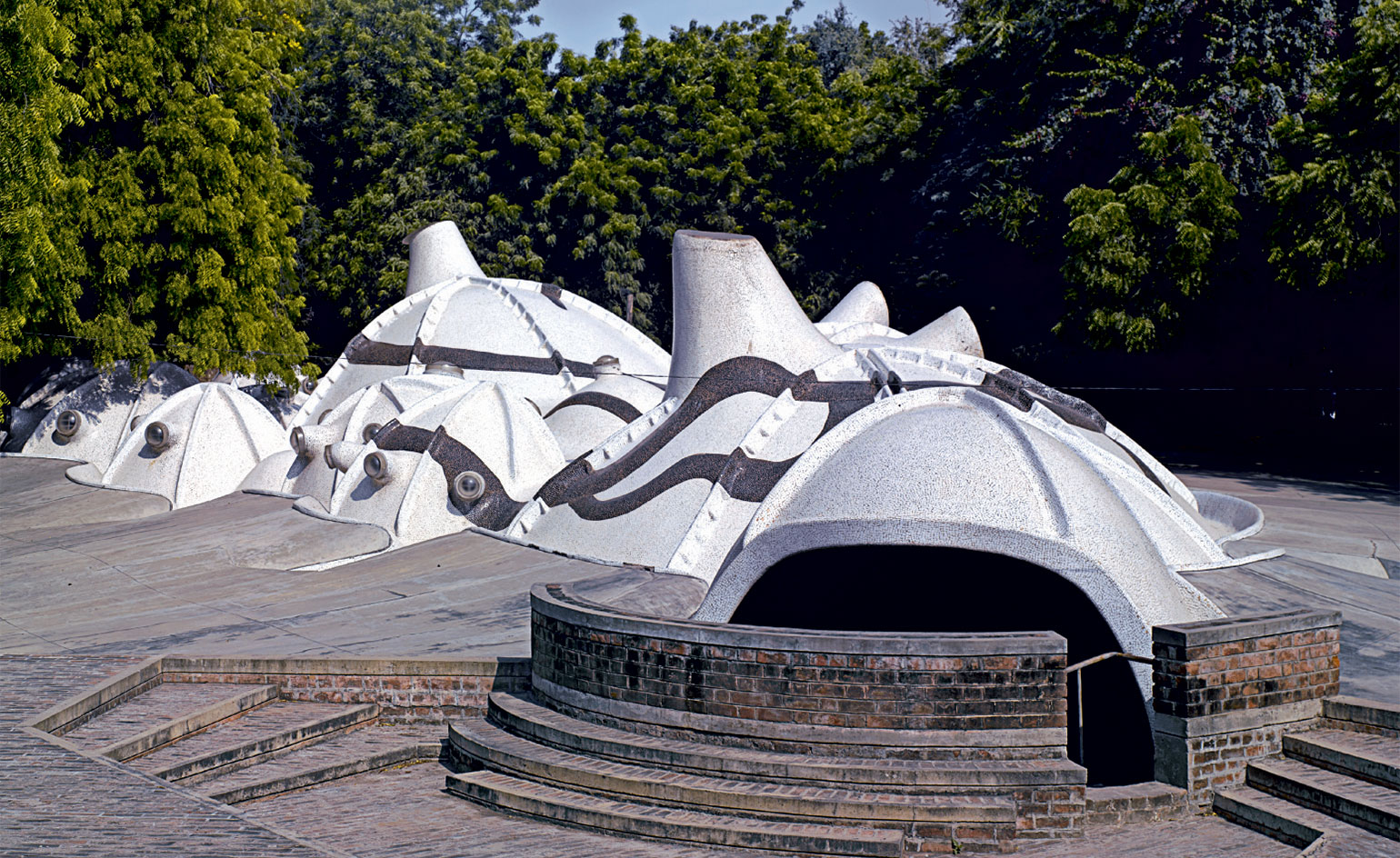 Hunting for the entrance, I decide to eschew the broad shallow staircase leading up to the landing between the vaults and follow a modest path tucked away somewhat counter-intuitively to the left of one of the vaults. As I pass from the intense sunlight down a few steps and through the low doorway into the cool dimly lit interior, I wonder whether I might have made a wrong turn. When I mention this to Doshi later in his neat little office, he smiles. ‘But you did find your way, didn’t you?’ he says. ‘For me, architecture is all about discovery.’

Compared with the austere, concrete bunker-like confines of some of Doshi’s other buildings in Ahmedabad, such as the towering Central Bank of India in Lal Darwaja, Sangath comes as a surprise. If there is one thing you learn quickly about Doshi, it is just how different his buildings can be from one another.

Take the Premabhai Hall, in central Ahmedabad. Built in 1972, it is a defiant statement in concrete that stands head and shoulders about its surroundings, giving no quarter either to the crumbling remains of the 15th-century Bhadra Fort next door or the equally ornate and mouldering clusters of traditional courtyard merchant houses that surround it. The Hal is an effrontery so bold that it takes away the breath even as it brings a smile to the lips. 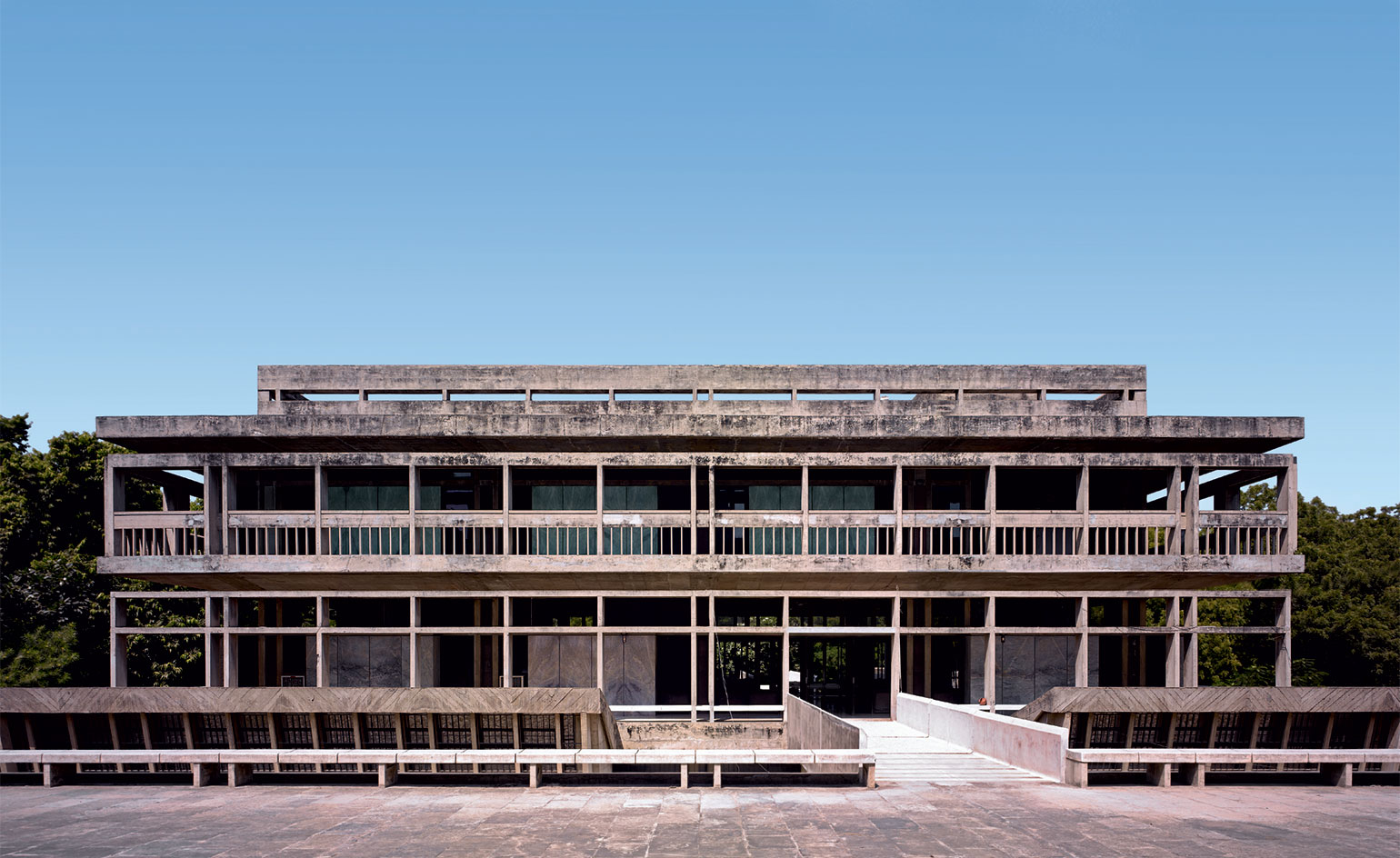 Doshi’s concrete Institute of Indology in Ahmedabad features a monumental balcony, which provides retreat from the heat

Then compare it to the sinus, asymmetrical domed caverns of the subterranean Hussain Doshi Gufa gallery, with its bulbous skylight ‘eyes’. The conceptual gulf between the two is so vast that even considering the 20 years that separate them, it is hard to believe both were designed by the same architect.

Doshi’s career spans 60 years, so a little evolution is to be expected, but tracing its arc, it feels as though having begun his professional life a fervent modernist – trained at Le Corbusier’s atelier in Paris – halfway through his life Doshi abruptly traded the rational for the fairy tale, the international for the local, and became, in effect, a completely different architect.

Some accounts of his career take that line, roughly dividing his life’s work into the modernist phase (1960s to 1970s), the indigenous models phase (1980s to 1990s) and the primal, mystical phase (1990s to the present day). But Doshi says that his work should be viewed as a continuum, part of his ongoing attempt to synthesis East and West, modernity and tradition, the developed and the developing worlds. 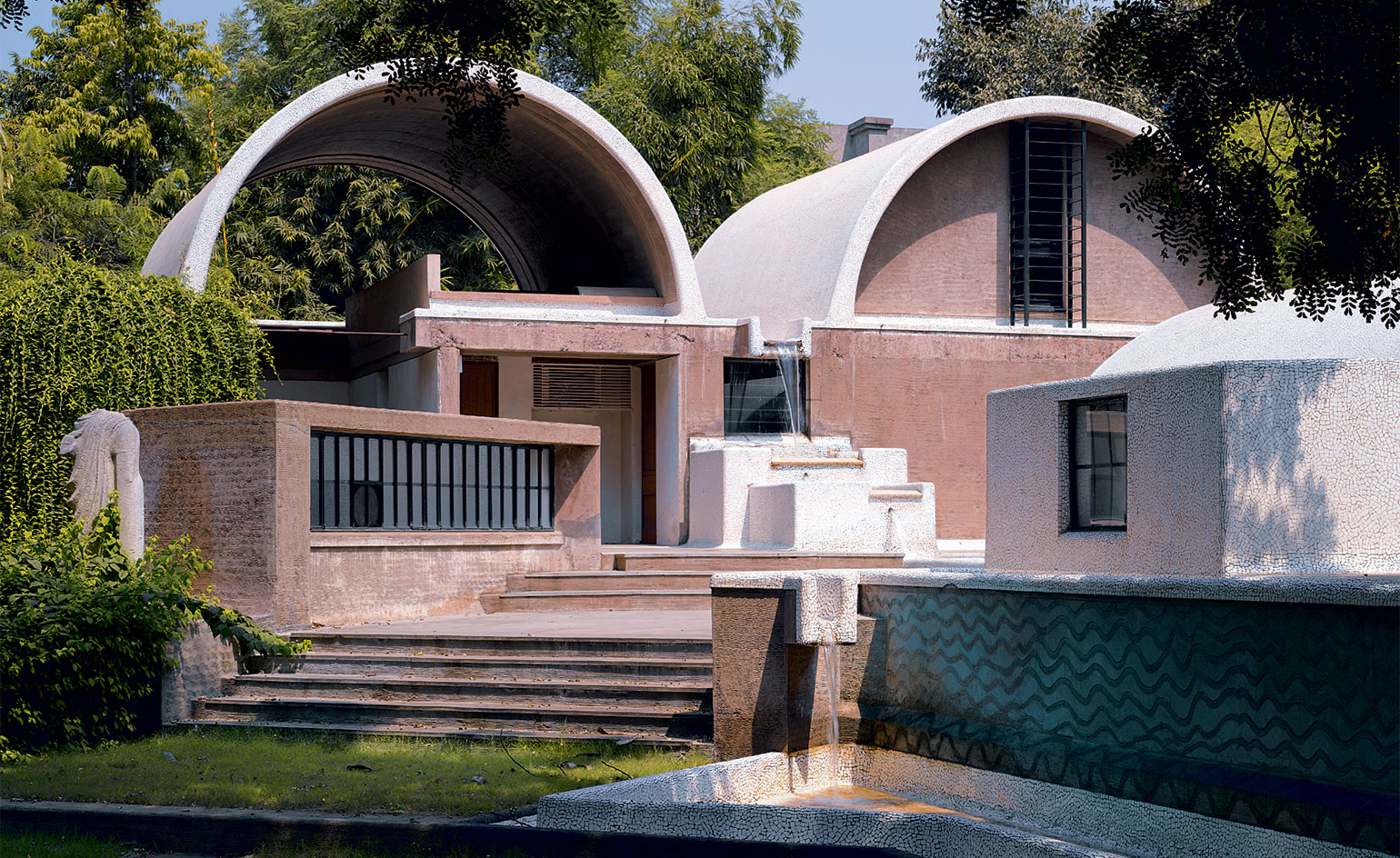 Doshi’s vaulted office, Sangath, is half set below ground level, with small recessed windows and doors to reduce the need for air conditioning

As such, he can be placed alongside Sri Lanka’s Geoffrey Bawa, Egypt’s Hassan Fathy and Jordan’s Rasem Badran – architects thoroughly grounded in modernism, all of whom spent their lives exploring ways of adapting their dogma to local materials and needs.

‘The world is constantly evolving time is passing, even I am not the same architect I was [on the project] before, so why always come up with the same response?’ declares Doshi, with what sounds like the faintest hint of rebuke for the ‘iconic’ tendencies of today’s starchitects. ‘If you are in tune with your project and the purpose for which it is being built, then you drop your ego and ask yourself what it really is that you must do. Then the building emerges. No style, no period, pure experience.’

Thanks to a cosmopolitan eye, Doshi often sees similarities where others simply see difference. Take his account of his first visit to the Villa Savoye. While he writes that he found the experience overwhelming, he also says that his most abiding impression was not that he was seeing something radically new but rather that he was seeing something that resembled places he knew very well.

Savoye’s ramps made him think of temple staircases and its pilotis reminded him of columns holding up the houses in his hometown, Pune. After all, he says, they too are ‘flexible houses, with columns in the middle, courtyards and two walls that are load-bearing.’

Doshi sees his openness to multiple sources as the inevitable result of the balancing act that living in a country like India requires. ‘You cross the street here and you have to be aware of the cattle, the pedestrians and the hawkers as well as the bikes, trucks, buses and cars. We live simultaneously in many centuries,’ he says, as I notice the office shrine behind him, a photo of Le Corbusier and a statue and a print of Indian gods. ‘This country is like blotting paper: our strength, our vitality is born out of heterogeneity; we absorb everything.’

He says that the unwillingness of modernism to acknowledge the past, as well as what he terms its ‘obsession’ with building mega-structures, has disfigured the movement’s promise. ‘Perhaps [contemporary architecture] is more technologically advanced but it is far from being human. It has become a product. Great buildings should also be touchable.’

These days, what pleases him most is his mission to make his adopted hometown the most liveable city in India. ‘A truly sustainable city is a city where the least human energy and time is spent in getting things done. Then people have time for reflection and can once again act like human beings, not the robots they have been forced to become. With a little surgery, Ahmedabad could become the ideal city. This is what I shall be proposing to the government.’