The awarding of the Pritzker Prize to Indian architect BV Doshi provides an opportunity to understand his immense contribution to world thought. Balkrishna Doshi’s work, spanning over six decades, finds a place in the events and currents in the histories made by people and politics, economics and technology, during this eventful period.

Balkrishna Vitthaldas Doshi was born in 1927, in Pune. He grew up in a large, tradition-bound joint family. Myth and story, ritual and ceremony, sensuous delight in the intense tropical environment contrasted with simplicity and austerity in everyday life, formed Doshi’s childhood world. 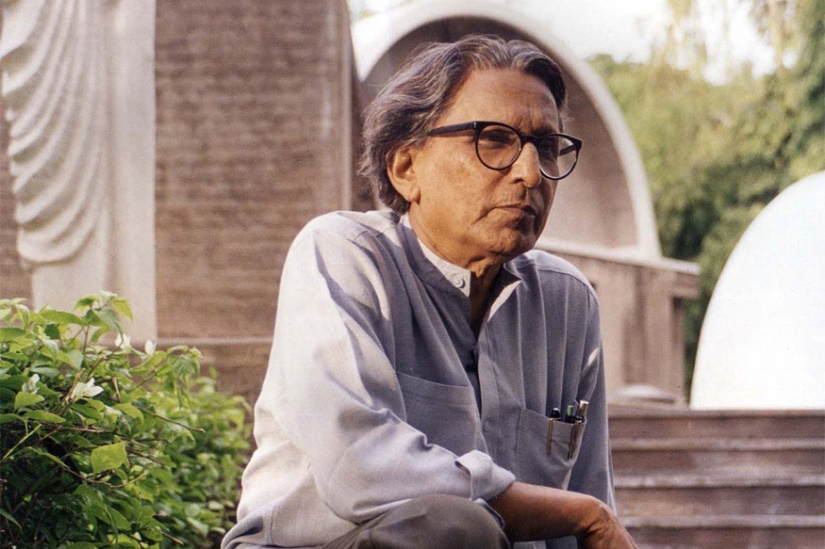 Balkrishna Doshi is the first Indian to win the Pritzker Prize

Indian society was undergoing great changes as he grew up. The years of Doshi’s childhood and youth were the years when the Indian Independence movement had gripped the imagination of all. He can thus be seen as an inheritor of the values thrown up during the pre-Independence years. He was to go on to articulate the expression of these concepts in architecture, the built environment and in the form of institutions.

While it is not possible to exhaustively describe Doshi's architecture in one article, we can study a few projects from two representative categories of his work: the institution and the home.

Doshi began his practice in the first decade after Independence in Ahmedabad, a city that had been at the forefront of the making of the new nation. These were also the years of the beginning of new historical currents internationally — the ‘Cold War’ between the capitalist and communist Blocs was beginning, and colonial rule in most parts of the world was coming to an end. Change was in the air, both in the world at large, as well as in the world of architecture.

Formally, Doshi's training and experiences positioned him in the Modernist idiom — functionalist, technologically-oriented, and valuing unadorned expression. The Modernist outlook was also based on the premise of universalism, where local conditions and cultural traditions were less important than clear, rational solutions that arose in response to need.

As a practitioner, Doshi therefore encountered the particular nuances of the Indian public as well as private patronage, where, on the one hand, the Modernist architectural idiom was a symbolic statement of being a modern nation or individual, and yet there was an equally strong desire among the patrons to build a language that distinguished itself as "Indian”. Doshi had to navigate “between the banks” of these two extremes. The question, in his mind, was not “What is modern architecture?” or “What is Indian architecture?”, it was rather the question “What is architecture?”

Doshi neither used “traditional” forms and vocabulary, nor attempted to demonstrate technological prowess. His architecture arose out of close and detailed attention to climate, ways of life and the particularities of material practices in the local context. At the same time, Doshi effectively utilised his mastery of fundamental architectural means to make an architecture that simultaneously addressed local conditions while making significant contributions to the international discourse of modernity.

If one studies various institutional buildings that Doshi designed, one sees him developing this approach. From the Shreyas School (1961) to the CEPT Campus (1968) to the Indian Institute of Management, Bengaluru (1983) one sees unwavering attention to creating an architecture that is fresh and unburdened by either historicist or “contemporary” cliches. The fundamental ingredients of the art of architecture — light and shade, subtlety of enclosure and openness, proportion and rhythm, the sensuous quality of material – all these are brought together to create vivid and memorable ensembles, powerfully creating a unique sense of place in each case.

Yet Doshi's architecture is not merely based on his sheer mastery of the elements of art. He redefines the very nature of cultural institutions. The place of education no longer emphasises the formal, somewhat overbearing character that had become associated with schools and colleges. It explores the archaic origins of learning as a place of meeting, a crossroads that encourages encounter. In this sense, his architecture is not just “great” architecture, but a truly revolutionary and creative architecture.

The home or dwelling is at the other end of the spectrum. Doshi attempts to find new expression for the sense of home.

In the newly developing urban lifestyle, a somewhat more individualistic and socially less cohesive mode was coming into existence. The question that Doshi investigated was: How do we maintain the warmth of family life while allowing for a greater sense of individuality?

Doshi there explores a safe, secure, warm interiority of the home. Spaces for individual activity and spaces for family activity are not rigidly divided, but rather flow into a continuity. By considering outdoor space (trees, the sky) as an essential part of living, Doshi releases the tightness of internal relationships. In his own house and houses for his daughters, he develops this concept, giving due weight to each family's particular and peculiar modes of interaction. In this way, here too, there is an in-depth exploration of architecture's expressive and symbolic role.

There is in these projects an outstanding mastery over the art of architecture. Material, light, texture and colour, complex exploration of space along with a wonderful sense of a relationship with natural elements make these houses unique.

When carried over into the collective realm of housing, this tension between the individual and the social takes the form of needing to express coherent spaces of socialisation while allowing the individual to have a sense of identity. In various housing projects, urban design proposals and especially in the Aranya Housing project in Indore, Doshi shows imaginative and path-breaking approaches to these significant questions.

In one sense, architecture can be said to give voice to the beliefs and desires of a people. It presents, symbolises, and facilitates a particular notion of social relationships, relationship of humans with nature, and concepts of the place of technology in culture.

Doshi's works show unique new insights into all these concerns. At the same time, his work offers new possibilities for a way of life. This is why his architecture is of great importance not just to India, but to the world at large.

Doshi is perhaps unique in the ability to shape both tangible works of architecture as well as intangible institutional forms. In the spirit of pioneering radical thought typical of Doshi, it seemed to be the time to ask fundamental questions about man’s relationship to the Earth, as well the relationships—political, social and economic—between humans. Doshi not only asked these questions, he energetically sought new forms of organisation and association. In his view, the new world order offered challenges, dangers and opportunities. Only newer modes of organising the institutions of society would allow some appropriate response.

Thus his huge investment of energy into education through the setting up of the School of Architecture was a step in that direction. For the next 40 years and more, he was to participate in building up institutions that broke the conventional mould, and became outstanding centres of education, research, debate and dialogue. While his primary interest was architecture, he was fascinated by a whole lot of human endeavors. He believed that disciplinary boundaries were not as important as the interconnectedness of fields of knowledge. Thus, Doshi initiated the setting up of the School of Planning, encouraged and supported the setting up of the School of Building Science, the School of Interior Design, the Community Science Centre, the Hutheesing Visual Arts Centre, the Kanoria Centre for the Arts, and the Herwitz Art Gallery along with the Hussain-Doshi Gufa (now Amdavad-ni-Gufa) in what was then known as the Centre for Environmental Planning and Technology Campus.

Doshi’s work through the decades has been extremely varied, and almost defies categorisation. Is he a traditionalist? Is he avant-garde? Is his work experiential and sensuous, or intellectually structured and crafted? These are questions that one cannot answer consistently or with absolutely unambiguous clarity.

His works stretch what one might call the classical quality of architecture to the limit. The plan and the section are rigorously organised. Modules and measures tightly structure space. The search for bare essentials seems to simplify and clarify the architectural order. Most often, the fewest possible elements are used. Symmetry and repetition are deliberately instituted. Yet this highly intellectual operation is hidden, it structures experience but does not override it.

The actual experience of the work shows a different and divergent set of interests. A sense of playful ease, an enjoyment of difficult juxtapositions, a preference for multifarious and often fragmented parts coming together, the acceptance of circumstance overriding or leavening the purity of the concept, a sensuousness of material articulation, a joyful inclusion of the capriciousness of natural or human actions – all these are typical of Doshi's mature work.

There is a lyrical sensuousness, this playful engagement and use of sun and shadow, hand-crafted finish and precise engineering, colour and texture which intensifies the experiential over the conceptual. The observer is deliberately moved sideways, on diagonals, upwards or downwards, over smooth crisp straight vista or cobbled pathway, between and around impediments — in short, the body rather than the mind encounters the architecture. One is absorbed into architectural experience rather than be able to maintain a critical distance.

By appreciating the qualities of Doshi's architecture, we are able to sidestep the chronology-based (contemporary, modern, post-modern, traditional….) historicist mode as well as the geography-based (Indian, Regionalist, Critical Regionalist, Non-Western, Third World, South…..) mode of rigid classification. Further, we observe that his work attempts to both transcend as well as integrate high culture and low culture forms and concepts.

The 60-year period of Doshi’s practice is one of those periods when the vision of a good life, of a good society and of a balance between the human and the natural worlds seems to have been under constant scrutiny, discussion and questioning. Doshi has played a significant part in this, and his creative outlook on all these matters has had a deep impact on the world of architecture and public discourse.