The exhibition celebrates the architect’s career of over six decades and highlights the experience of architecture as habitat.

Running until 29 October 2017, the show in Shanghai showcases notable works of Balkrishna Doshi, a supporter of the arts who founded the Visual Arts Centre and the Kanoria Centre for Arts in Ahmedabad. His architectural projects include personal and public housing, community projects, educational institutions, urban planning and furniture design. 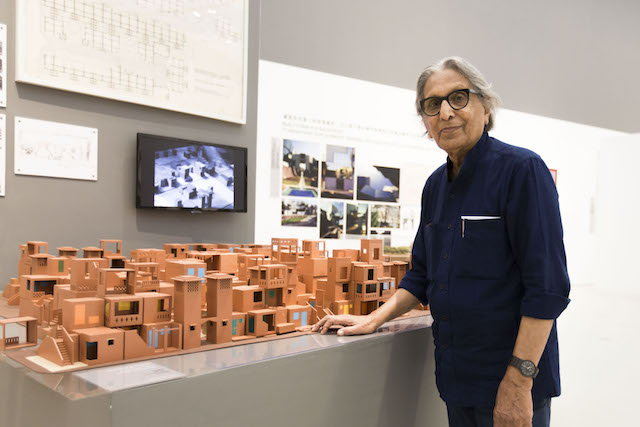 Works from different stages of the architect’s career are showcased in “Balkrishna Doshi: Celebrating Habitat – The Real, The Virtual & The Imaginary” in multiple scales. As part of Power Station of Art’s themed programme “Architecture & City” launched in 2013, this is the Indian architect’s first retrospective in China.The aim of the exhibition is to raise the awareness of young Chinese architects about Balkrishna Doshi’s philosophy on architecture, as well as to highlight the purpose of architecture as habitat.

A talk named “Porosity, Paradox, Practice – In Conversation with Doshi” was held on 28 July 2017, moderated by Rajeev Lochan, the director of National Gallery of Modern Art, New Delhi. The sharing allowed the audience to gain insight into the architect’s background, beliefs and practice. 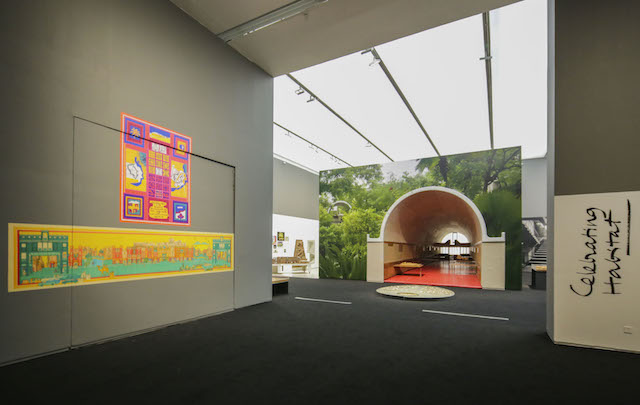 Balkrishna Doshi, was born in Pune, India in 1927. Following his studies at the JJ School of Architecture in Bombay, India, he worked with Le Corbusier in Paris in the early 1950s. In 1955, he established Vastu-Shilpa (Environmental Design), his own office. Later, he launched the Vastu-Shilpa Foundation for Studies and Research in Environmental Design to create affordable housing for India’s underprivileged people, specialising in city planning. Doshi also worked closely with Louis Khan on the project of the Indian Institute of Management (IIM) in Ahmedabad, in which he explores the spatial forms for academic institutions. 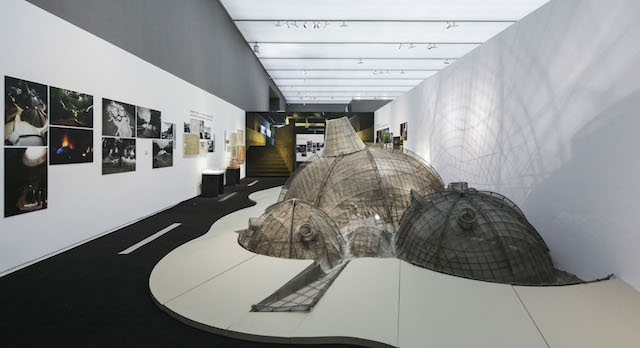 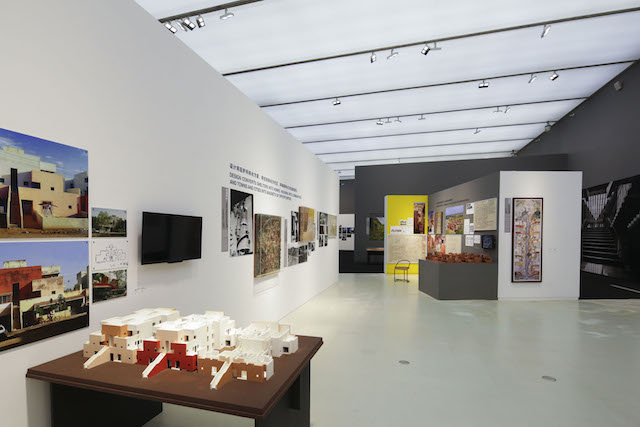 The exhibition is curated by his granddaughter, Khushnu P. Hoof, who is based in Ahmedabad, India. She graduated from the School of Architecture, CEPT University, and has been working with architect Balkrishna Doshi since 2003. The show at Power Station of Art is presented in a non-linear and non-chornological fashion, but connected through space. Doshi’s architectural models, sketches and paintings, photos and videos, as well as music are arranged in an interconnected yet intuitive manner. 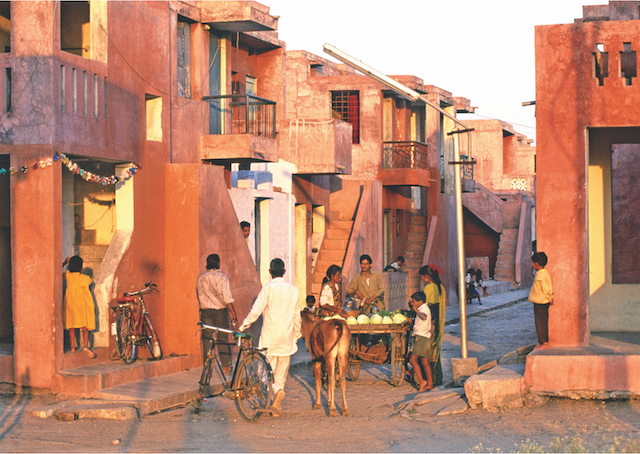 Architecture as habitat and social experience

Doshi is known for his emphasis on the human experience of architecture, especially when he builds housing meant for communities. In providing a habitat and living space, he likes to bring together communities instead of segregating them into different social classes.

The architect speaks about the role of an architect in a talk at the Bengal institute earlier on:

I think as a professional, our job is also to look at the society as a whole, and think about how do we look at these as a part and a person. […] Architecture is one of the ingredients of life, and I think that ingredient must become as living as the life is. 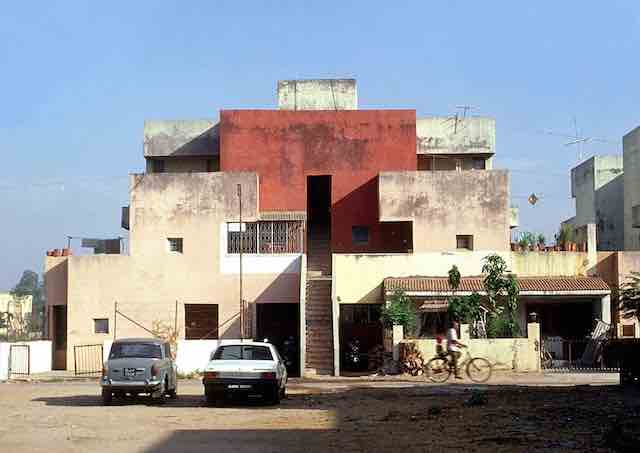 In the same talk, he also comments on the philosophy behind his housing projects:

I had a chance to do 4000 houses for the economically weaker section – the people who came – migrants – people who came from outside, who had no land, no money, and those people who needed something. […] Over time they have the initiative of earning and doing something of their own […] Now twenty years later, things will change, and the houses will become better – they get a job, they rent the houses, they sublet – and the community also changes. At the periphery, bigger houses surround the smaller houses, so the children of the rich and the poor live together, and they grow together. […] The architecture profession is not only the building itself, it is the organism and it is actually an extension of a biological order. […] I think the role of the architect is also to be a social activist. 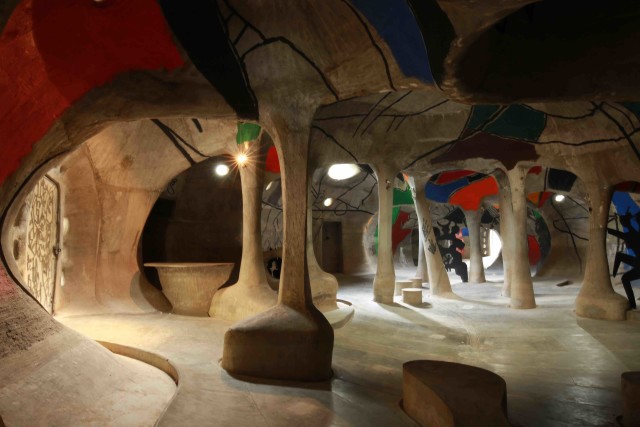 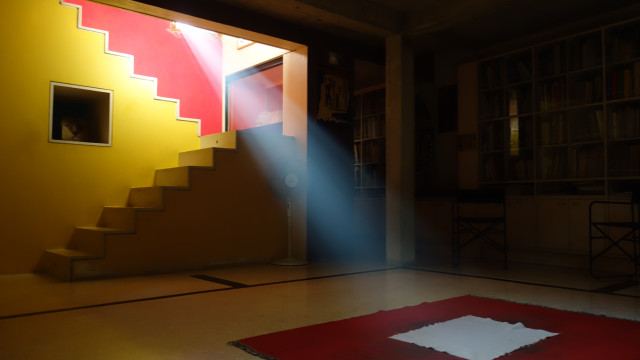 A site-specific installation of the Kamala House forms the entrance of the exhibition. Completed in 1961, the Kamala House is Doshi’s home. It invites the viewers to experience architecture as a habitat through their presence in the space. Meanwhile, Amdavad ni Gufa is an art gallery that Doshi designed that is below ground level. It resembles a cave and displays Indian artist M. F. Hussain’s work in its interior. These structures highlight the use of space and the feelings architecture invoke to people who occupy the space.

Doshi’s studio, Sangath, located in Ahmedabad, consists of a series of vaults. Surrounded by gardens and landscape designs, the studio exemplifies the fusion of Western modernism and Indian contemporary architecture. 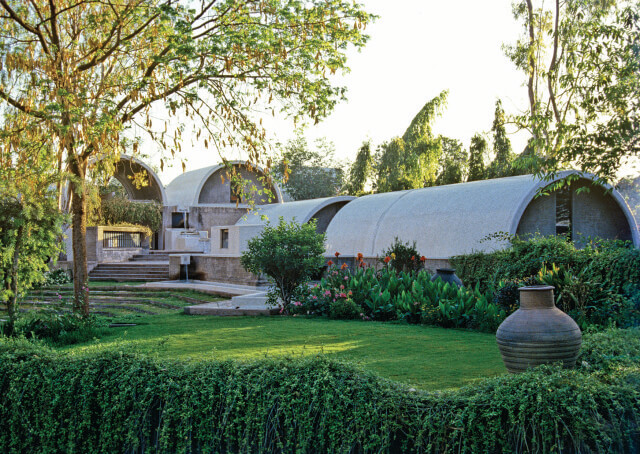 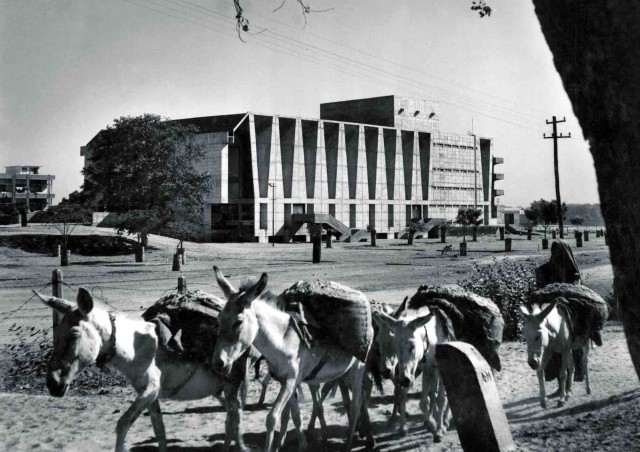 Modernism and philosophy in architecture

From the 1950s onwards, Doshi worked with architects Le Corbusier and Louis Khan, who greatly influenced his practice. In the Post-Independence Era, Doshi’s work incorporates both modernist architectural philosophies, as well as elements in the Indian context. In doing so, the architect, alongside with other Indian modern architecture pioneers, such as Charles Correa and Raj Rewal, develops a starting point for the next generation to construct and express India’s modernity. 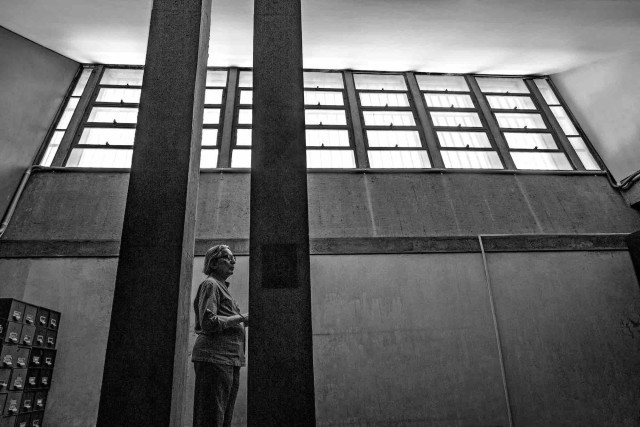 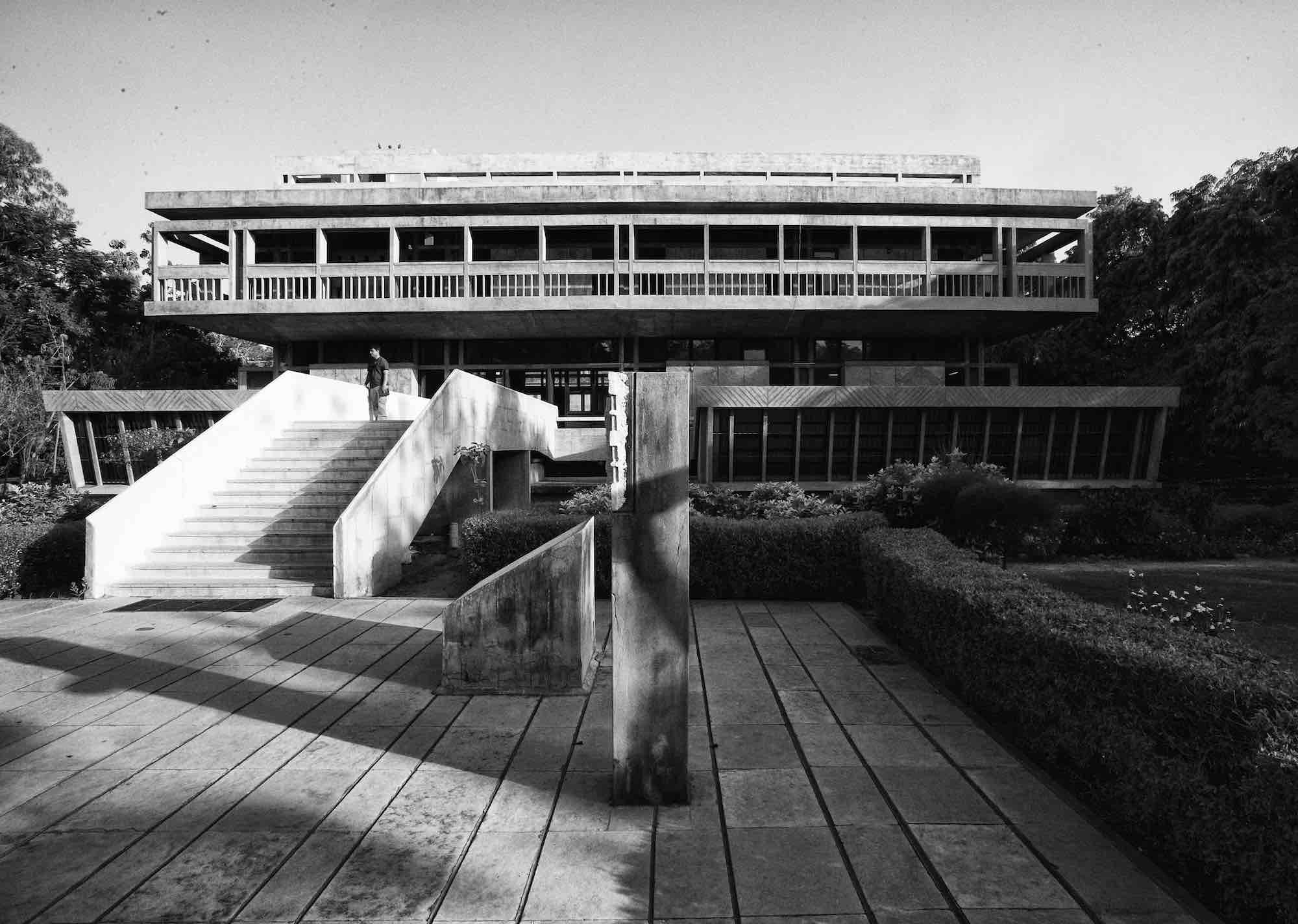 Brutalist architecture in the Indian context

Brutalist buildings by the Indian architect include Central Bank of India, Tagore Memorial Hall and Institute of Indology, as well as the campus of the Indian Institute of Management (IIM), Bangalore. Bangalore is known as the ‘garden city’ of India. To adapt to the Indian context, the architect, in his tour of the campus, cites Indian temples as his inspiration and emphasises the use of gardens and open spaces:

I think this building is made around corridors – around not closed corridors – not only the roof and columns, but a corridor with vague parts, so that you are partly inside and outside. You are constantly in this campus – outside and inside – wherever you cast your eyes, you will see the gardens. 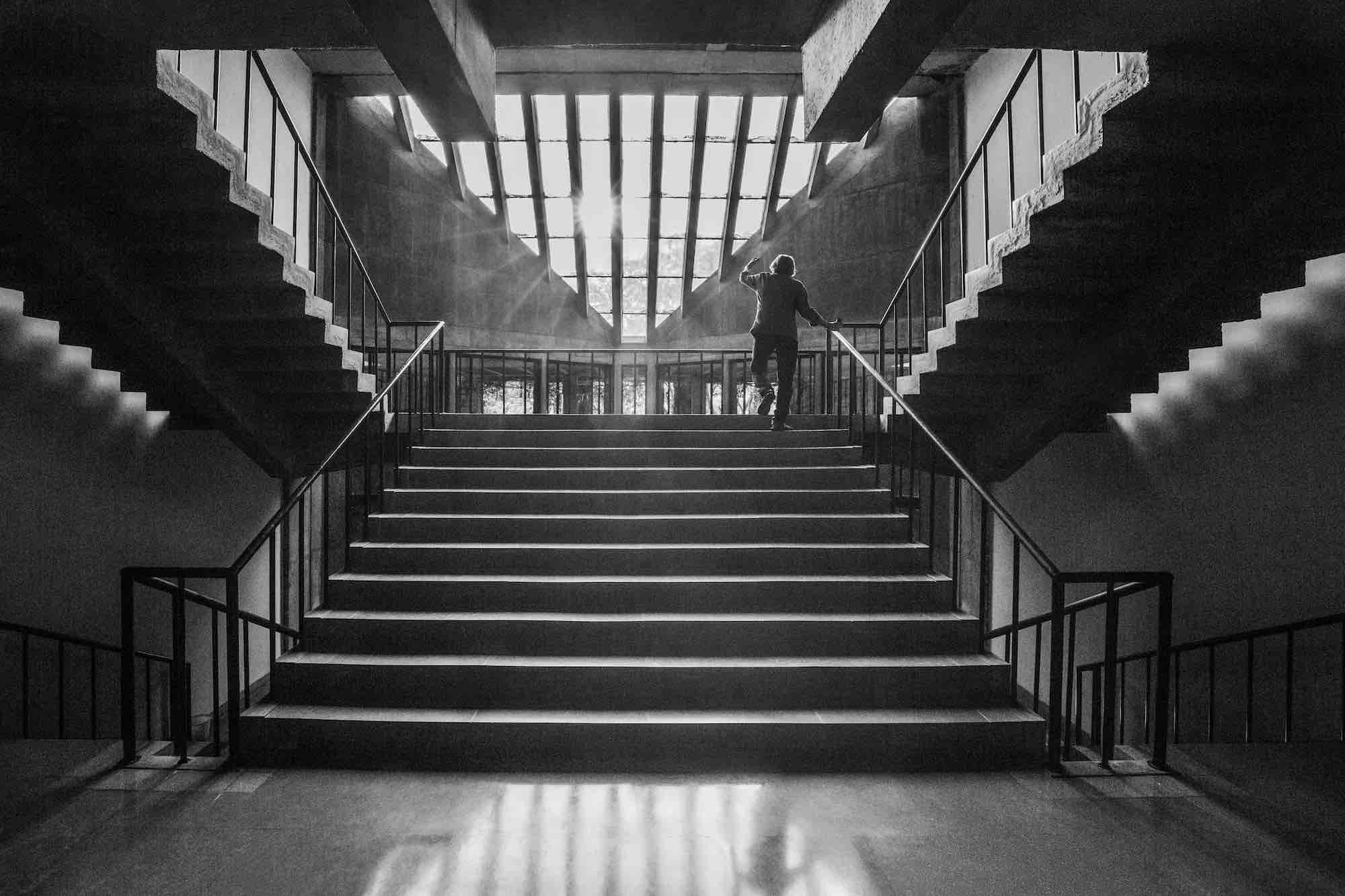 He also shares the role of experimentation in the construction of this Brutalist building:

…we had three contractors, and no contractor had done work of this kind. […] for everybody it was an experiment. And the experiment was like this: for example, when you cast a staircase, how do you cast concrete? […] Concrete at that time in Bangalore wasn’t that much…