Building on a suburban plot Vastushilpa Consultants adapt the traditional otla to form the heart of the home. Photography by Edmund Sumner 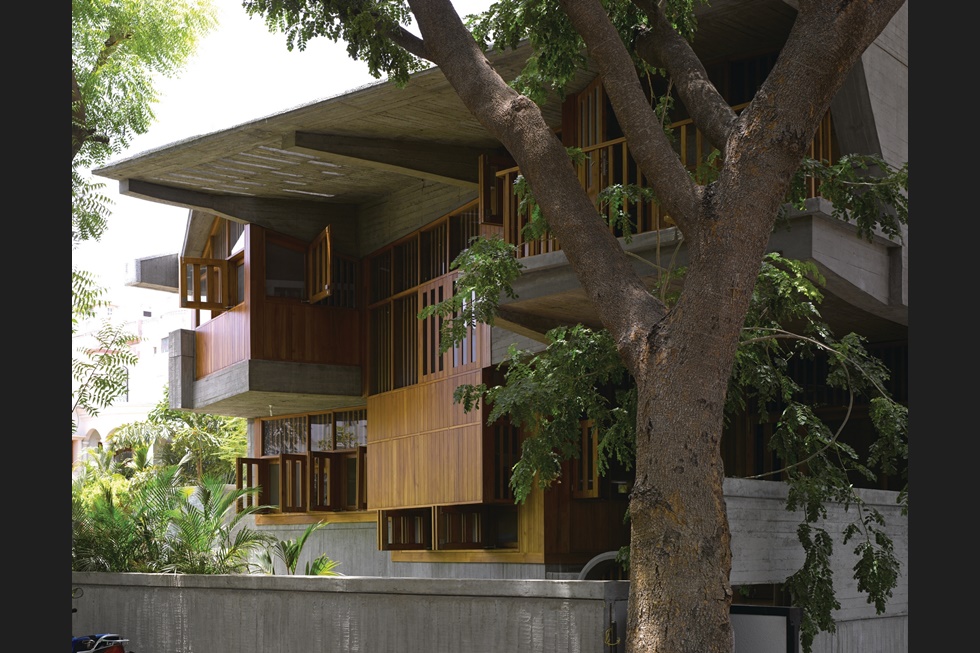 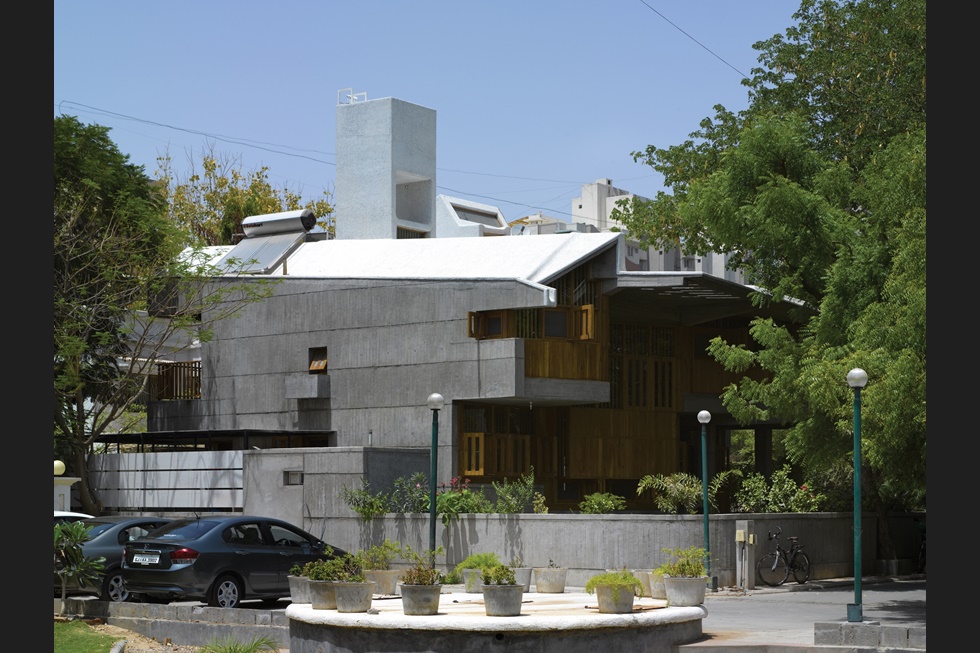 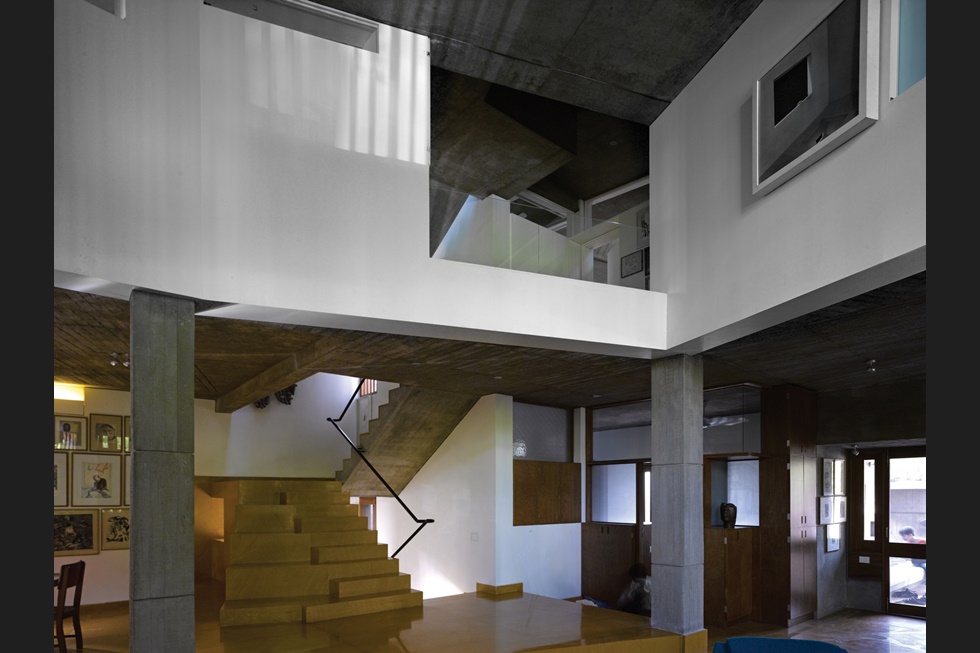 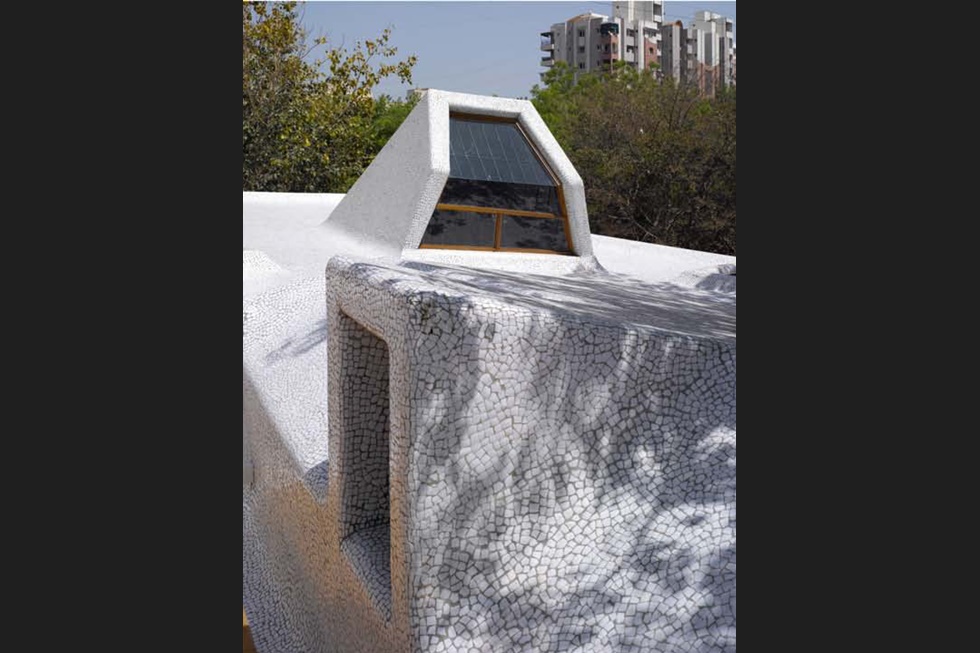 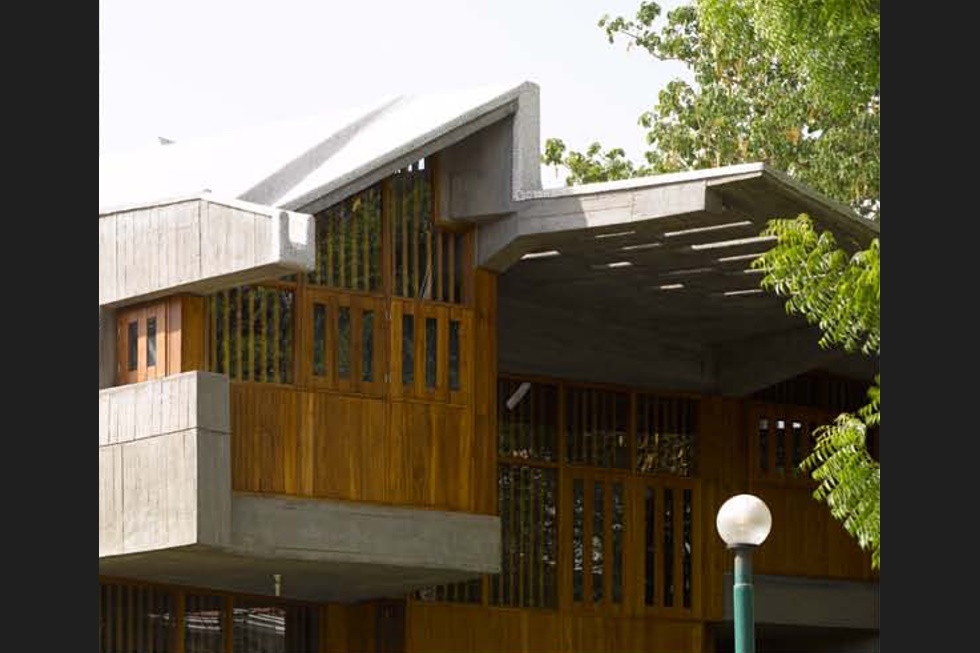 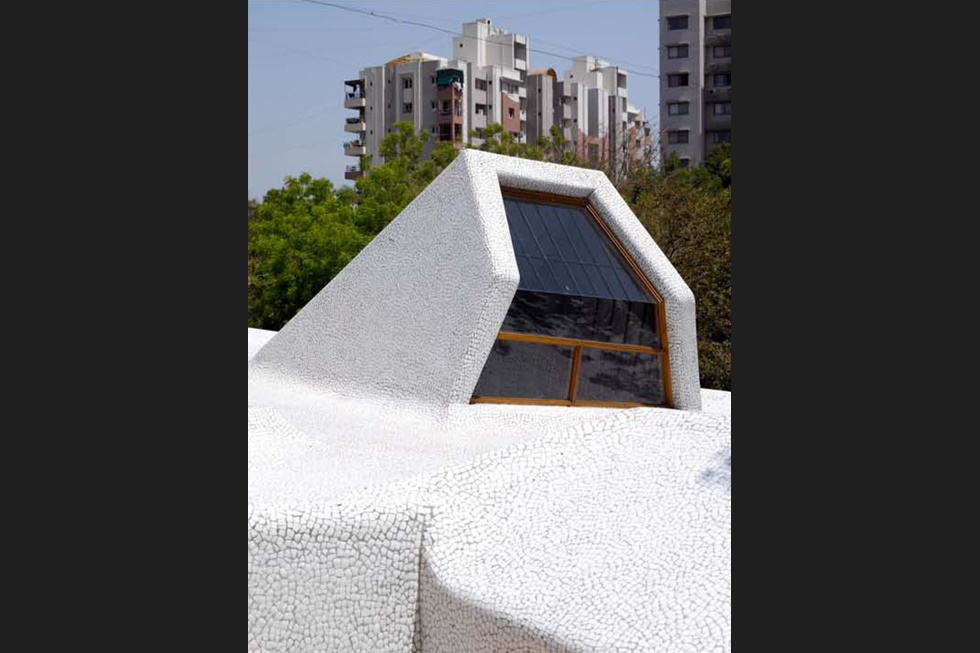 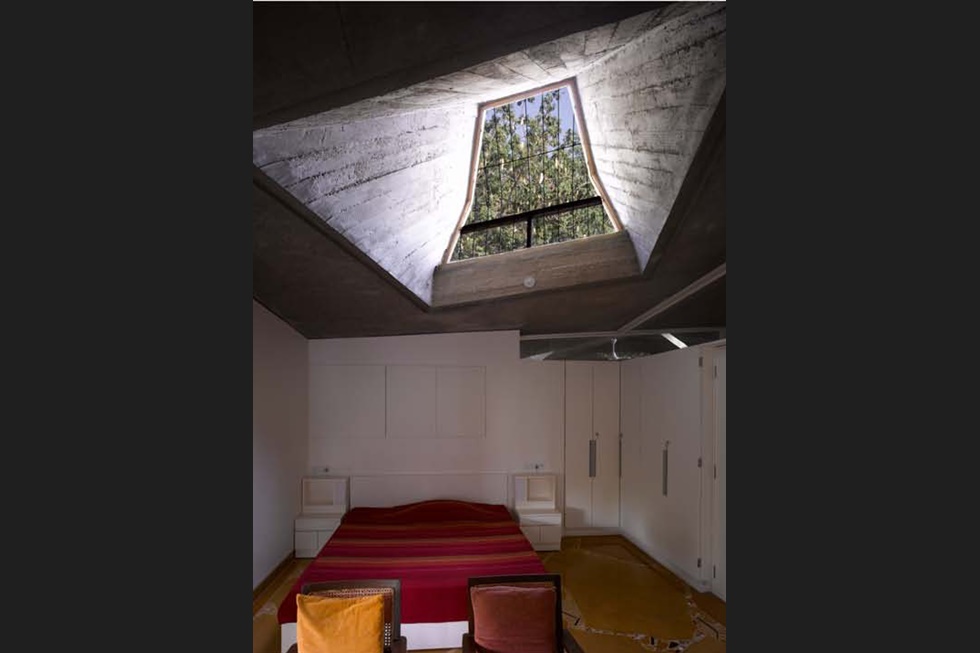 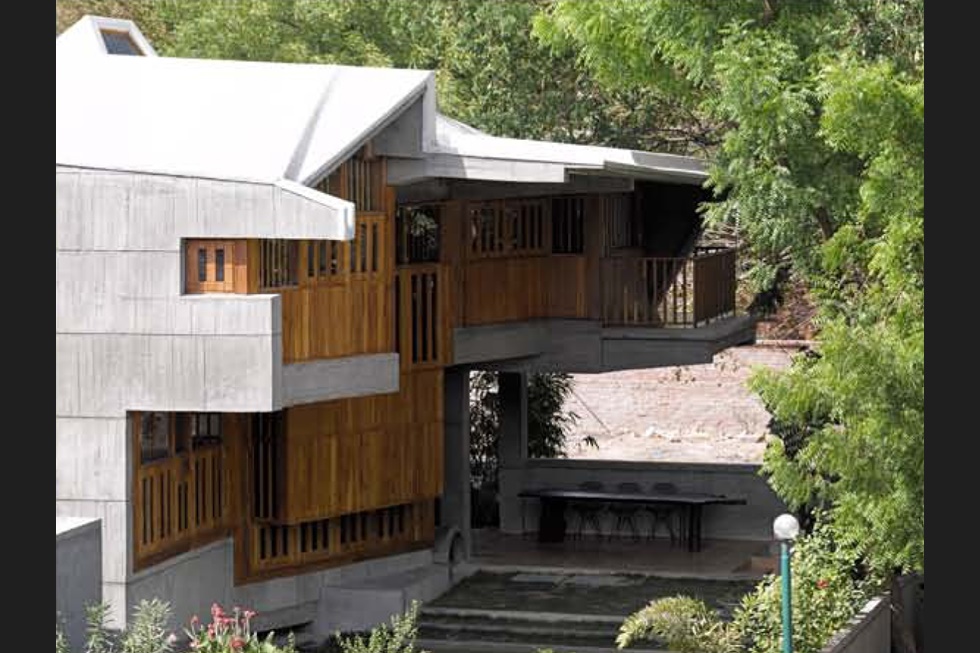 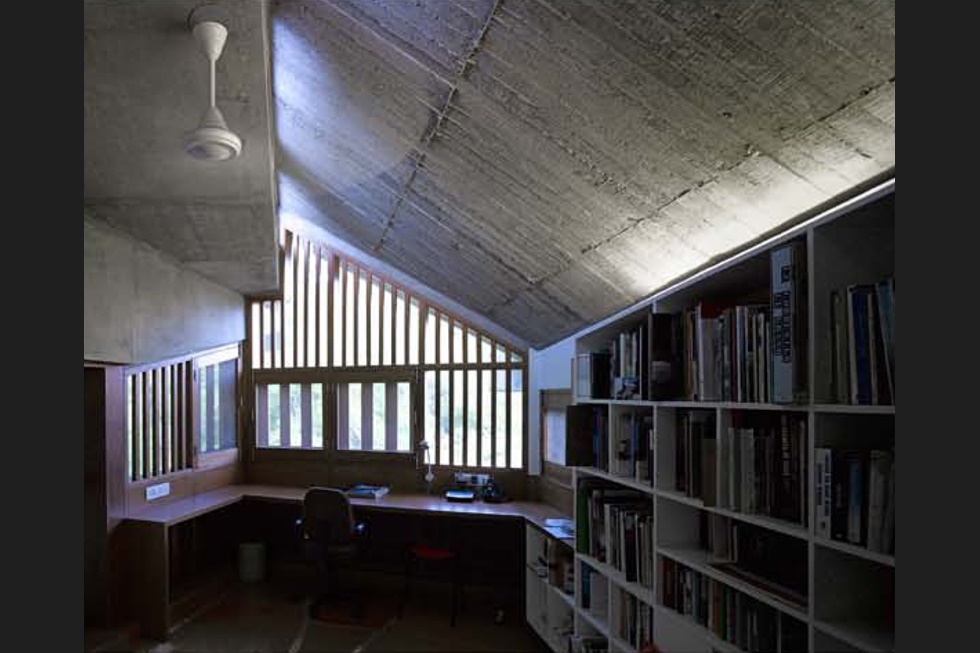 ‘The issue with the design of this house,’ explains architect Rajeev Kathpalia, ‘was how to borrow your neighbour’s garden without having to see their house.’ By this he means how to position windows and rooflights to help extend a building’s spatial boundary, setting up diagonal views across the house to capture specific vistas of trees and sky.

Developments vary in nature from fully gated enclaves to more open and permeable streets, and this falls into the latter category, resembling a standard suburban cul-de-sac, distinguished only by the curious and underused communal garden and clubhouse positioned on axis at the far end of the street. These elements supposedly justify the service charge that all residents pay but, as Kathpalia points out, ‘when we arrived people had lost interest in this place.

Even though it was a relatively wealthy enclave they didn’t even have a proper road and the garden was a rubbish dump.’ As part of this project, Kathpalia spent a year convincing the housing society to pay for improvements. He says residents are now much happier with the development, and are interested to see who will buy an adjacent untouched plot.

Kathpalia hopes to convince the eventual purchaser to collaborate so that both properties make the most of their shared boundary.In Kathpalia’s mind, the pursuit of privacy does not demand isolation. Instead, this house is distinguished by a series of spaces that are full of light and air.

At the centre of the building is a large hall, inspired by a traditional Indian domestic device called an otla. Typically this was a series of steps built outside town houses where people would sit out and engage with neighbours and passers-by. But as Kathpalia points out, ‘you never meet people in this sort of neighbourhood’, so the otla is placed inside to form a social hub for their gregarious family. ‘We said, our living room should be like an otla, so let’s sit out in here.’

The steps are made of distinctive Jaisalmere stone, laid in huge, as-found, irregular pieces. ‘I used to see these stones on the side of the highway, stacked up by merchants,’ says Kathpalia. ‘It would have been a real shame to cut up such huge pieces of stone, and wasteful, so we simply laid them as they are and then used broken down pieces in a variety of finishes as infill. We got the workmen to have fun with this and to make their own mark, before polishing the whole thing to become an integral, highly polished surface.’

Kathpalia’s attitude to working with an economy of means also influenced how the concrete was cast. By providing the formwork himself, he deftly economised on the most expensive part of the casting process. ‘I bought some old wooden pallets that they sell by weight,’ he explains. ‘You strip them down to get decent pine planks. We also used plywood, mixing the two to make the patterns.’

This improvised process is common in Indian construction, partly by accident and partly by design. Into this are inset beautifully crafted timber windows and panels, again inspired by historic precedent, the architect recalling how he was reminded of walking through the streets of a medieval town lined with timber facades.

The timber here is teak, and the composition creates different rhythms that resonate with the dappled shadows on its surface. With double skin concrete walls, freestanding columns and floating concrete slabs, the structure is held in equilibrium without the support of any internal walls.

The interior could be opened up to make, as Kathpalia speculates, an interesting gallery. As it is, however, freestanding storage walls define the internal rooms, with clerestory glazing and built-in lay-lights enhancing the house’s spatial fluidity. On the first floor all rooms have at least one roof light, set into ceilings that rise up to trace the line of the distinctive white ceramic roof.

Sitting in a sunken roof terrace, this external space is perhaps the most overt reference to the lineage of Kathpalia’s work, building on the legacy of his father-in-law, Balkrishna Vithaldas Doshi. Since 1995, Kathpalia and his wife Radhika have worked alongside Doshi. Recently joined by two new partners, Doshi’s niece Khushnu Panthaki-Hoof and her German husband, Sönke Hoof, they practise together from Sangath, Doshi’s office, as Vastushilpa Consultants, the name of his original firm before Stein, Doshi & Bhalla was established in 1977.

According to Kathpalia, there is no stylistic bias to the practice’s work. Instead, extending Doshi’s significant influence on Indian modernism yet further, they continue to synthesise human accommodation, constructional integrity and an economy of means into creative new forms of architecture. Even at this modest scale, with angles replacing Doshi’s more recent curves and vaults, you can see considerable innovation at work.