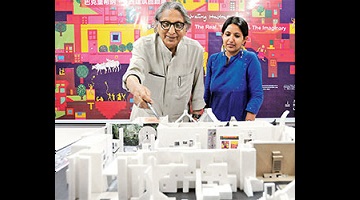 Come July and architects BV Doshi and granddaughter Khushnu Hoof will be making their way to China for the former’s retrospective exhibition at the Power Station of Art Museum in Shanghai. The exhibition — Celebrating Habitat: The Real, the Virtual and the Imaginary — has been curated by Hoof. Doshi’s earlier retrospective was held at the National Gallery of Modern Art, New Delhi in 2014. During this exhibition, Yan Gong, Director of the Power Station of Art, Shanghai showed interest in taking the exhibition to China.

“The exhibition in China starting end of July coincides with 70 years of India’s independence — also when I passed out of JJ School of Architecture, Mumbai in 1947. When we did the retrospective in Delhi, a lot of students came and it was a unique experience. It was curated in a way that you are walking a street. Students would walk through places like they would do on a site visit,” says Prof Doshi. Sending Doshi’s works to China was not an easy task. With 60 years of work — big models and drawings, the logistics took most time. “Four 40ft containers with the works were sent to Mundra and they have been shipped and will reach China on June 9,” explains Khushnu.

The Power Station of art, Shanghai is one of the largest gallery spaces in the world and the exhibition will continue for three months. This is the first time that the works of an Indian architect has been showcased at this scale. Doshi and Khushnu have selected 28 projects for the display, 40 handmade wooden architectural models, 60 hand-drawings, more than 200 photographs and sketches, furniture, hardware, miniatures, mixed media paintings and 5 large scale installations.

“The 28 projects will include some of the significant works like IIM Bangalore, low cost housing, Gufa, CEPT photographs and life-size models of Sangath Studio, Amdavad ni Gufa, Kamla House (in two parts), Indology (1 door) and Visual Art Centre (1 door). Most of this are interactive models so children can also play with it. Sangath is the model with optical illusion,” lists Doshi. He adds, “The models have been created in this way because normally, we never talk about proportions. These models will induce a dialogue and ask questions — how, why, what et al.”

Interestingly, each model also has a special music composed for it by musician Kabir Kathpaliya. “If it is a Delhi Darwaza, you’d hear the music of azaan and the mosque. Each model has its own music,” Doshi says. The models are not represented in a chronological order, it is like exploring a bazaar. “It is our effort of experiential exhibition. Here, you are not an onlooker or a visitor, but a participant. This new way of presenting is culturally very important,” Doshi believes.

The exhibition will also have never-before-seen works like Gyan Pravah — a museum on the banks of Benaras, temple in Pune, Township in Mumbai and Kuwait parliament. “My work is the story of life — and it is continuing, searching, changing and evolving constantly,” he signs off. The exhibition will remain open in Shanghai from July 28 to October 29.