Why Balkrishna Doshi Is Celebrated As An Architect For The Poor

For Balkrishna Doshi, modern city planners and designers of skyscrapers who try to provide all a person needs have got it wrong: architects must learn that a building is a living organism and allowing it to evolve naturally will create cities that thrive. 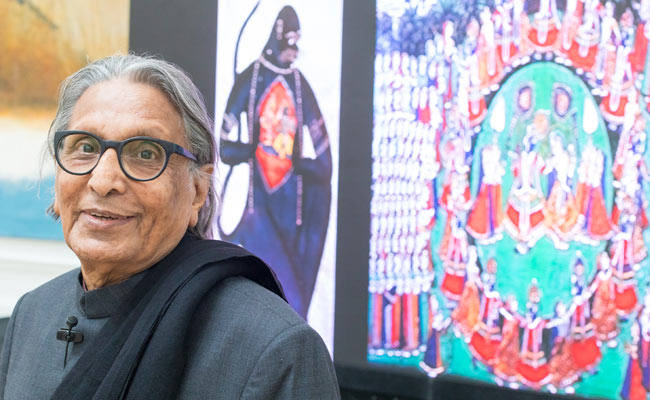 Balkrishna Doshi has a reputation as India's most celebrated architect for the poor. (Reuters)

London: Balkrishna Doshi began his illustrious career as India was born, and many of the architect's most influential projects in the intervening 70 years have involved building almost nothing.

The architect, an energetic communicator at 89, has a reputation as India's most celebrated architect for the poor.

In the city of Indore in 1988, Doshi was given 4,000 plots of land to develop. With resources limited, he gave each family just a concrete plinth with a hub of pipes connecting to a toilet, a kitchen tap and electric sockets. Doshi conceived 80 designs for demonstration homes - from one-room shelters to spacious multi-level houses - that showed inhabitants what could be built on such a block with local materials and elementary construction techniques.

When the architect returned this spring, about 35,000 people were living on the site, in two - and three-storeyed homes in a kaleidoscopic array of colours and designs, all built by residents, said Doshi. "They invented better than the architects could have," he said.

For Doshi, modern city planners and designers of skyscrapers who try to provide all a person needs have got it wrong: architects must learn that a building is a living organism and allowing it to evolve naturally will create cities that thrive.

"It's like planting a tree. When you plant one seed, gradually you get more fruit. And when you have that fruit, you plant more seeds and you get a forest," Doshi said in an interview at London's Royal Academy (RA), an ornate 17th century mansion in prime central London.

Doshi began his career in the 1950s with Swiss architect Le Corbusier, helping the legendary modernist to build Chandigarh as a striking, concrete capital for Punjab and later completing a university in Ahmedabad with US great Louis Kahn.

Since 1955, Doshi's practice Vastu-Shilpa has built low-cost homes in Gujarat townships, Jaipur, and Ahmedabad, as well as the city's world-renowned School of Architecture and a bubble-shaped art gallery nearby.

Graduating just as India gained independence, Doshi informed the bold, concrete forms of his modernist mentors with his own research into the layouts of pre-colonial Indian villages and construction techniques of ancient cities.

Responding to India's rapid urban growth, he rejected the concrete tower blocks and glass skyscrapers that sprung up around many western cities and designed communities that could grow organically.

In Indore, after 30 years, most families had built at least two flats: one to rent out and another to call home. Residents attached workspaces or shops to their living quarters, built pens for livestock, and added extra rooms to the sides.

The project, Aranya Community Housing, won the prestigious Aga Khan Award for Architecture in 1995, recognising the contribution of both Doshi and residents to the wider community.

Doshi said it was key that residents identified with their surroundings, and could adapt their homes in their own image, rather than existing like aliens in glass high rises.

"We want to have a quick process of change that gives us economic return, not social return: you make a multi-storey building that creates more economic return but it creates no social change," he said. "Growth has to provide security otherwise the growth has no meaning."